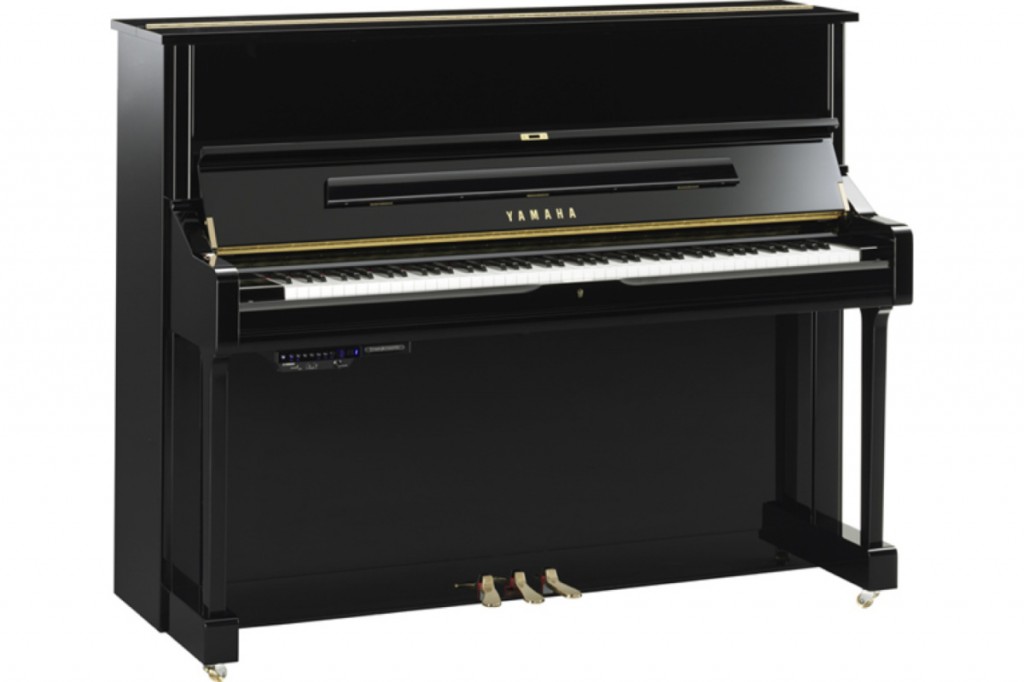 With Yamaha’s Electrified TransAcoustic, the Entire Piano Is the Speaker.

Imagine, however improbable this sounds, an electrified piano that didn’t use speakers to send music vibrating through the air — a device that required electricity to trigger its sampled sounds, but that didn’t have two or four or however many discrete sound-generating cones planted somewhere beneath the skin of its frame to conjure audible vibrations.

What if instead, the entire device were the speaker? Just as a fully acoustic piano’s soundboard amplifies the sound generated by the piano’s hammers striking strings, the electrified device could channel its digital samples through that same resonant slab of wood, in turn projecting the samples through the body of the instrument, aping the acoustic hammer-string paradigm by making the entire piano the sound source. What sort of name would you give this bizarre-sounding electroacoustic contraption?

Yamaha, which makes just such a device, settled on the name “TransAcoustic,” or “beyond acoustic.” That’s because it’s an acoustic piano with strings, but also a digital piano that can trigger samples — and if you like, a third thing that combines both and produces sounds you’ve never heard before. Yamaha unveiled it at NAMM 2013, demoed it again at the winter show in 2014, and it’s just now shipping. I had a chance to finally play one at King’s Keyboard House in Ann Arbor, Michigan this week.

Before we delve into the TransAcoustic, a few words about my current instrument, Yamaha’s AvantGrand N2, which I’ve written about before here and here. It’s something Yamaha calls a hybrid piano because it employs a full grand acoustic action that lives in the body of a quasi-upright (it looks like a grand, only with the strings, soundboard, cast iron plate and rim lopped off). The action differs from a full acoustic in one way: Instead of felt hammers, each key’s action terminates in a tiny device that emits something an optical sensor can read to gauge its travel velocity, triggering sampled sounds stored in memory.

Yamaha calls this system a “hybrid” as opposed to a digital piano, because unlike even the best digitals, which make significant compromises in the synthetic action to remain portable, the AvantGrand’s action is taken from one of Yamaha’s acoustic pianos — the C1 Conservatory Classic Collection — and slipped into the frame of the hybrid, where it triggers samples of an actual Yamaha CFIIIS grand played back through multiple speaker points strategically situated around the frame and which then resonate through the body of the device.

But the AvantGrand’s samples have a realism ceiling, however piano-like they seem. If you’re a pianist who’s played on full acoustics all your life, it’s not hard to spot the AvantGrand’s deficiencies, which I’d sum up as a kind of diminished presence — a resonant edge and spatial ubiquity that’s missing from the sound, especially when you’re hammering away at its lower registers. I love my AvantGrand, but it’s still a compromise, at least if we’re assuming pianistic fidelity remains the holy grail.

Power up the TransAcoustic, put it in digital mode, crank up the volume and start playing, and the sounds you’ll hear are coming through the soundboard, conveyed by a pair of transducers located along the base of the device. And where the AvantGrand’s samples come from Yamaha’s venerable CFIIIS grand, the TransAcoustic’s are lifted from the company’s newer CFX series, launched in 2010. During my demo, Yamaha told me the samples were created especially for the TransAcoustic, so this isn’t an off-the-shelf CFX sound.

But the TransAcoustic is also, and perhaps foremost, a full acoustic upright: Yamaha categorizes it as the U1TA, a vamp on the company’s U1 SH upright nomenclature. The frame and action and internal logistics are the same as the U1 SH’s, only with the TA’s electroacoustic bits and bobs. By shifting the sostenuto (middle) pedal left or right with your foot, you can turn the U1TA’s silent mode on or off. In acoustic mode, it’s just an acoustic U1 SH, the hammers positioned to strike the piano’s very real strings. In silent mode, the hammers are lifted back so that they strike nothing, allowing you to play the sampled sounds through the transducers and soundboard (with volume control), or quietly through a pair of headphones.

So what happens if you leave the sampled sounds on while in acoustic mode? That’s where the TransAcoustic makes the strongest case for its existence. By themselves, the digital and acoustic modes are roughly on par with what you’d expect from a digital-only or acoustic-only device, and in that sense not as interesting. But pair the sampled sounds of the CFX grand with the U1TA in its acoustic hammers-on-strings mode — both sounds played simultaneously and intertwining through the piano soundboard and frame — and the result is something that sounds much more like a full grand than the AvantGrand’s samples-only approach.

Not precisely like a full grand, to be clear. It’s still an approximation, and there wasn’t a CFX nearby to fairly compare, so I was left approaching it from the perspective of an AvantGrand owner. The difference between what Yamaha’s doing with the AvantGrand and the TransAcoustic comes down to volume and sonic omni-directionality.

22 years ago I bought a Kimball console piano from you. Throughout the past 22 years I have enjoyed doing business with you in every regard, whether it was your tuning of my piano or selling me one of your products. You are always professional, informative and gracious. You have the most knowledge about pianos…