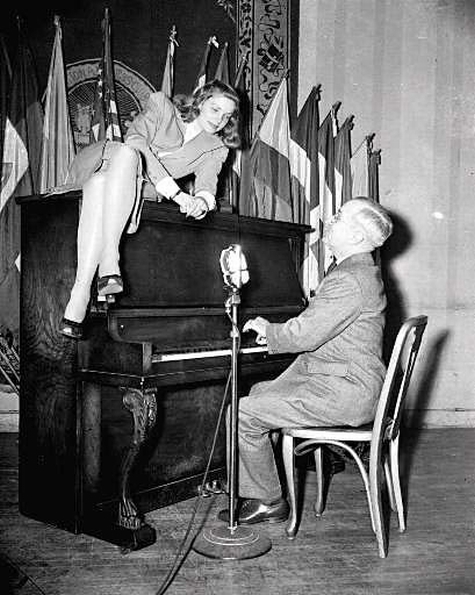 A sitting vice president entertaining a Hollywood star? Sounds like something that could happen in Joe Biden’s Washington. But a moment starring vice president Harry Truman, back in 1945, is getting renewed attention after news broke Tuesday that actress Lauren Bacall had passed away at the age of 89.

Before Bacall was truly a big star, she paid a visit in February of that year to the National Press Club in the nation’s capital as a surprise guest for U.S. troops. “The story is that during World War II the club was open on Saturdays for servicemen to get free hot dogs and beer,” explained Gilbert Klein, an American University journalism professor and the chairman of the press club’s history committee. “Politicians could come, but they weren’t allowed to talk for more than two minutes.”

Truman, at that time President Franklin Delano Roosevelt’s veep, tried something a little different from talking: He decided to tickle the ivories in the club’s ballroom. “At that time, Truman didn’t have much to do – he was vice president, he was presiding over the Senate and had speaking engagements, but he wasn’t nearly as busy as he was when he was a senator,” said Randy Sowell, an archivist at the Harry S. Truman Library and Museum. “And so he had some free time on his hands and he enjoyed going to events like that.”

Bacall popped out. Her press agent suggested she jump on top of the piano. She and the vice president posed for photographers. “What disturbed many people was that Truman appeared to be having such a good time, which he was,” wrote historian David McCullough in his enormous biography, “Truman.” “Bess was furious. She told him he should play the piano in public no more,” McCullough wrote of the vice president’s wife.

But Bacall did appear with Truman again. “Thereafter, she was sort of associated with Mr. Truman and she and her husband Humphrey Bogart were two Hollywood celebrities who supported Truman in 1948,” Sowell told Whispers.

Our happy customer’s testimonials Better Piano Service Starts Here at Roger’s Piano Before shopping at Roger’s, I did play a number of pianos. I went to a Kawai dealer in Burlington, VT; I went to White River Junction, VT, where I played several Yamahas and Steinways; and I went to some private homes. I was…